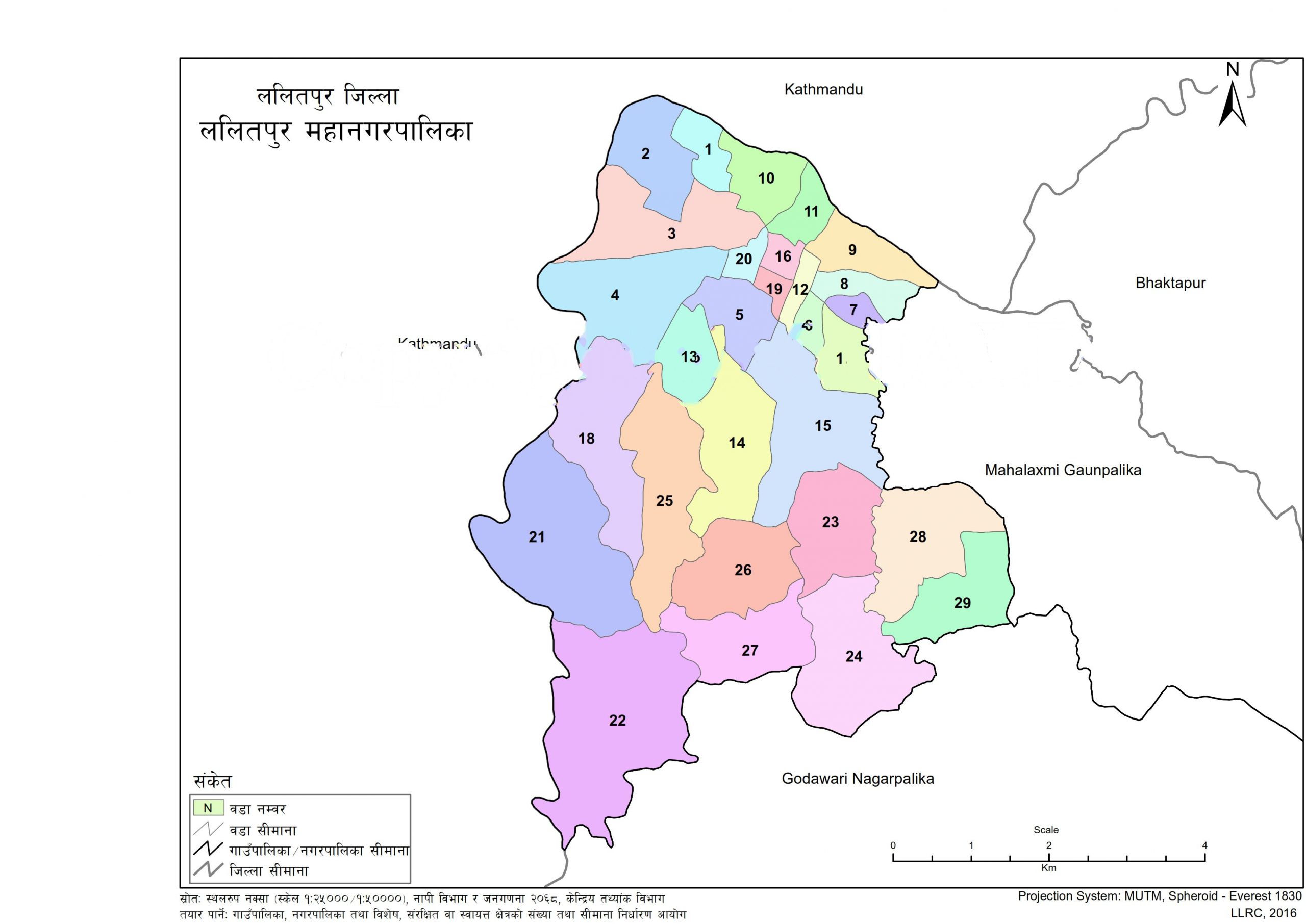 Lalitpur is a Metropolitan City, which is located in Lalitpur district, Province No. 3 of Nepal. Lalitpur has total 29 wards, which are scattered across 36 square kilometers of geographical area. According to 2011 Census conducted by Central Bureau of Statistics (CBS), Lalitpur Metropolitan City had total population of 284,922. 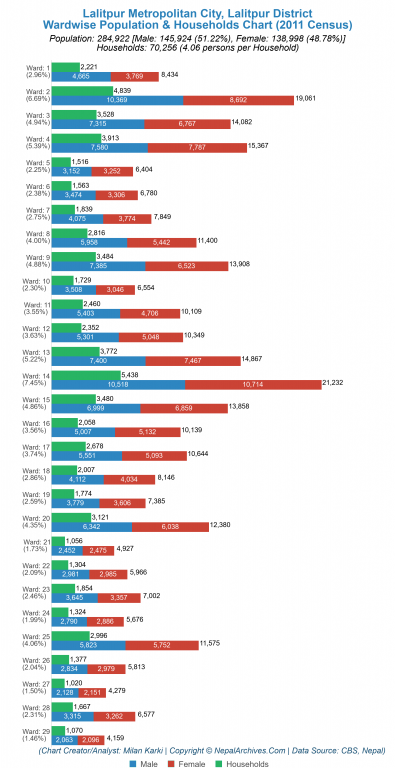 As illustrated in the chart, the ratio of male to female population was 1.05, which indicates that Lalitpur Metropolitan City had -5 percent lower males as compared to the females. Same as, the population to household ratio was 4.06, which means that in average 4.06 family members lived in each household. 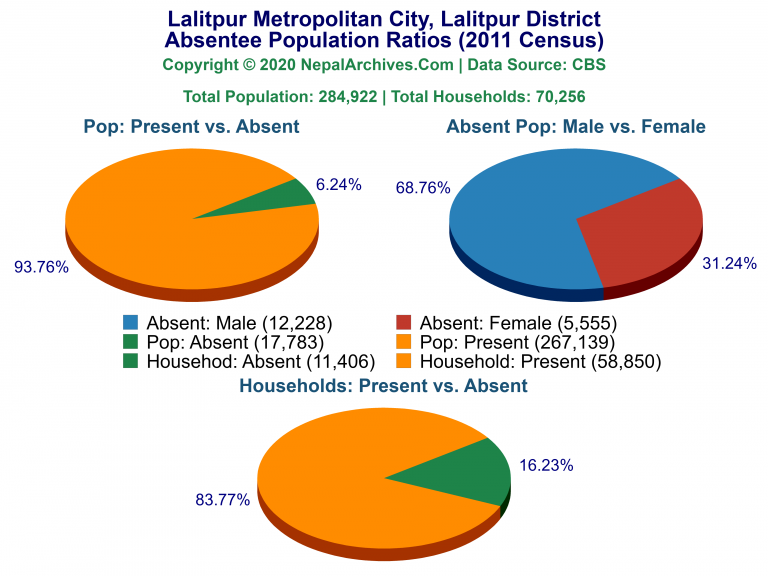 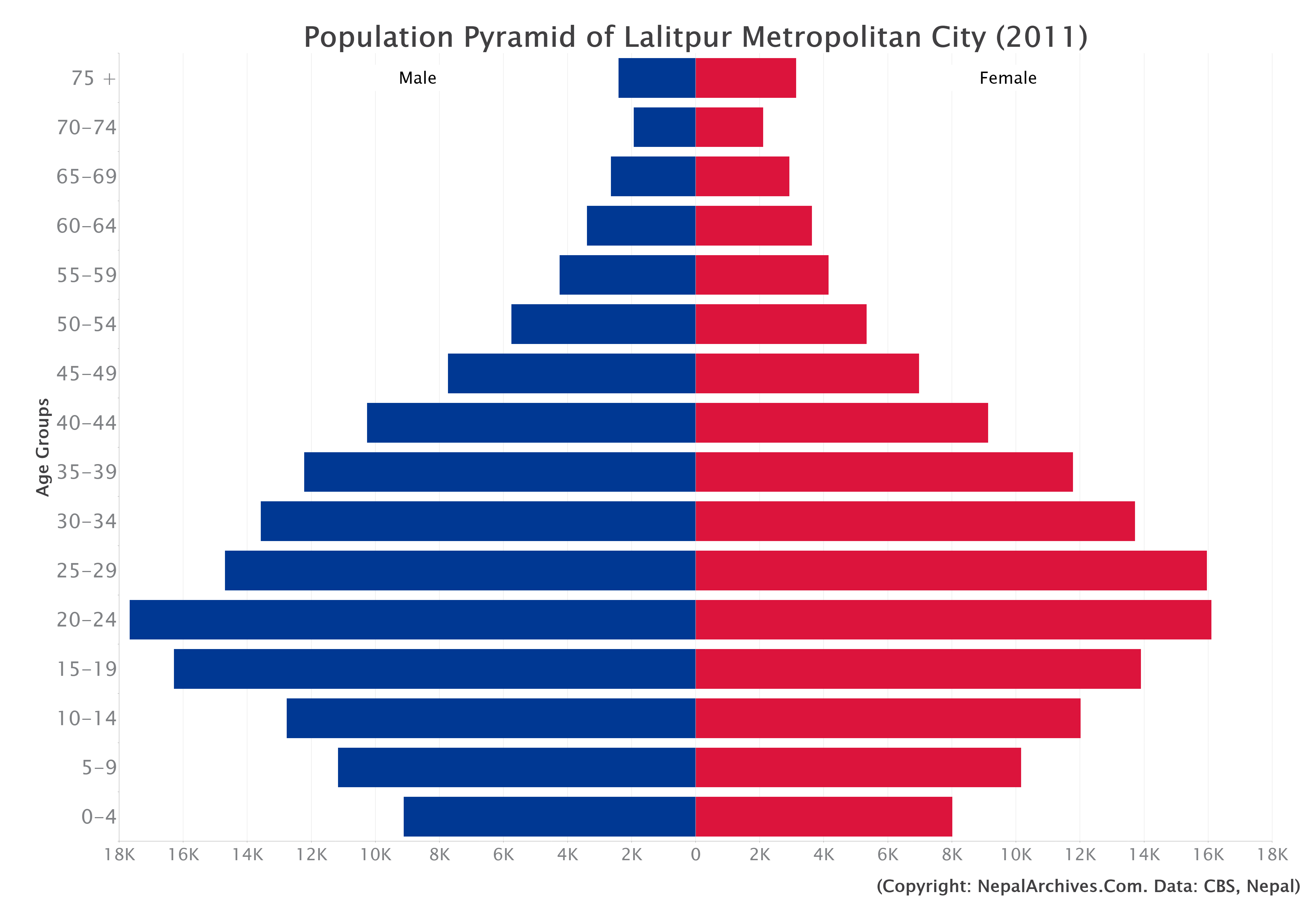 The population pyramid for Lalitpur Metropolitan City visually illustrates the male vs. female population based on different age groups. The population data and ratio tables are also available in this link.

There were 87,546 women of child-bearing age-group of 15 to 49 years. Same as, the todlers or children of 4 years or below were 17,135. The ratio of woman of child-bearing age and the number of todlers state that, approximately 196 children were born per 1,000 women. This number is also roughly used as fertility levels when direct measures of births are not available.

There were only 230,207 people fully literate in Lalitpur Metropolitan City as of 2011 who were able to both read and write, while 4,238 people were able to read but not write. In percentage while compared to genderwise population, there were inf percent of male were literate, while the percentage of female literacy was inf only.The literacy ratio between male and female population was nan. 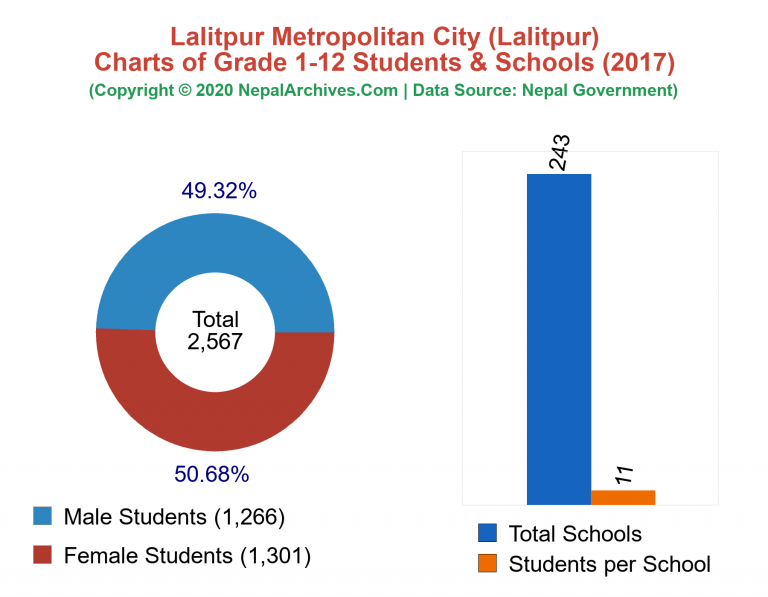 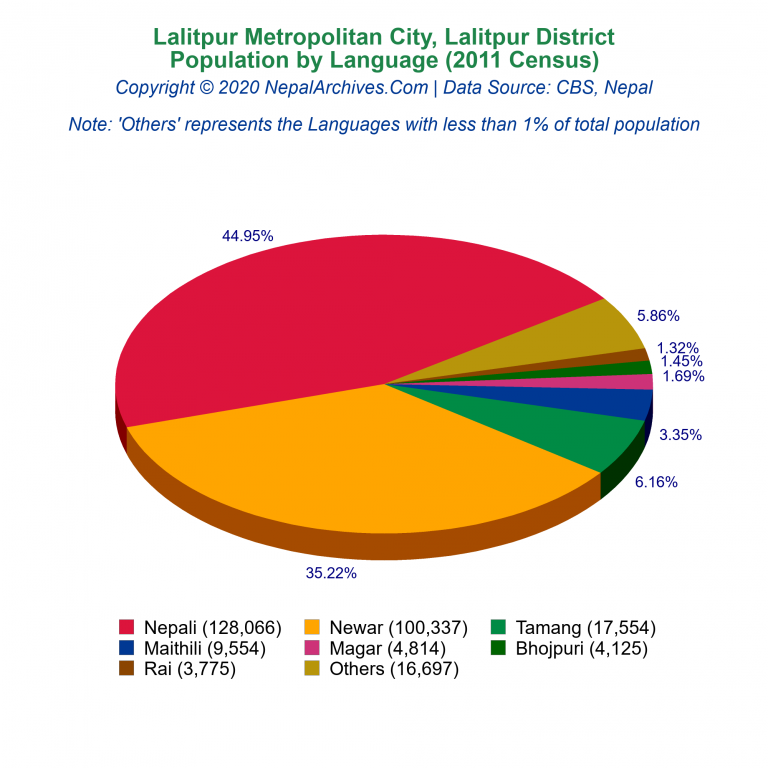 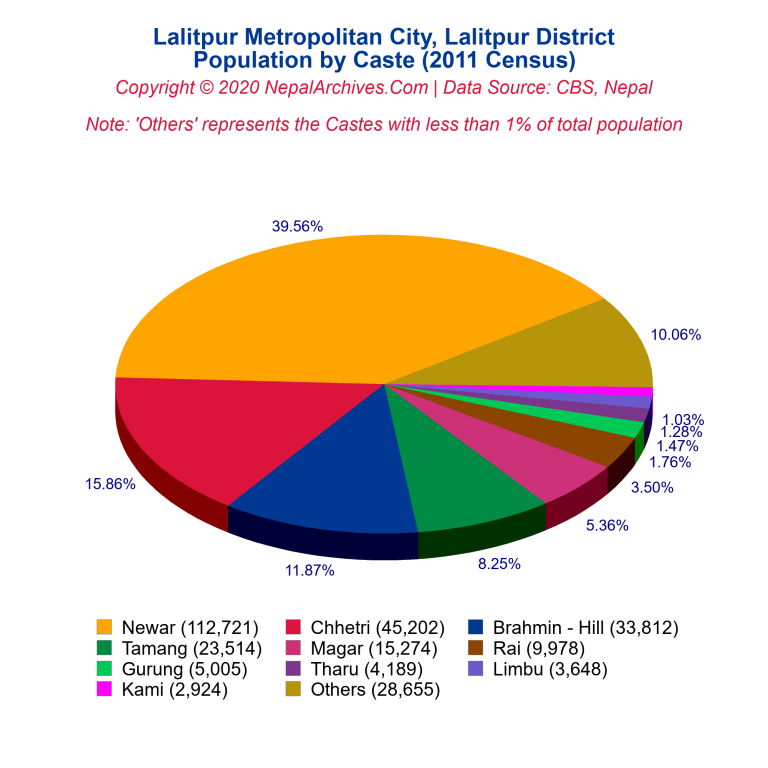 Similarly, there were 362 people who were blind and 414 people were deaf, while 38 people were both blind and deaf. Moreover, 316 persons had reported of having speech problems. Total 154 people had multiple disabilities. 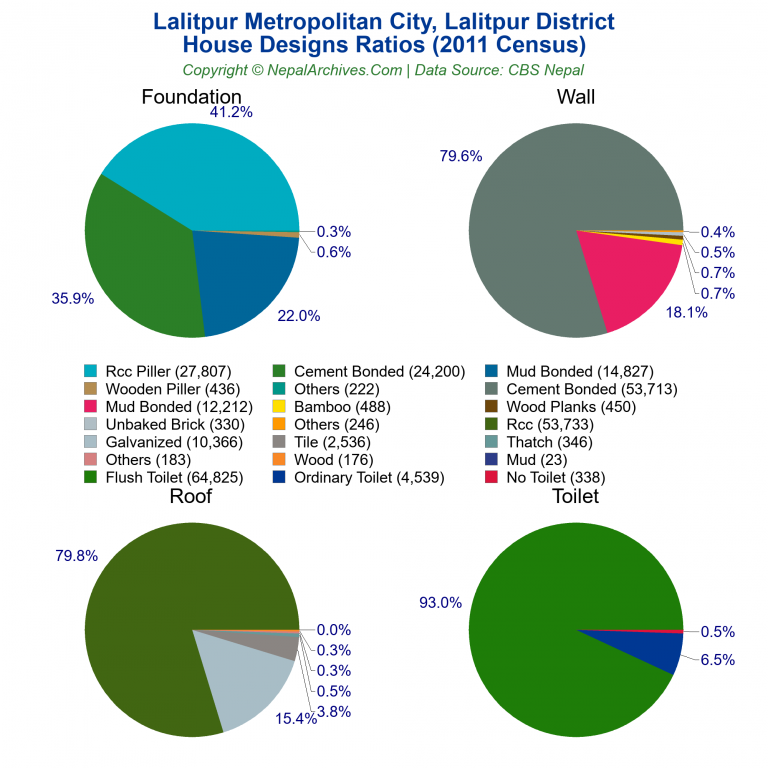 With respect to the toilets, 338 out of 70,256 houses didn't report of having a private toilet for their households. Nevertheless, 64,825 houses were reported of having flush toilet while 4,539 houses reported having ordinary toilets.

In Lalitpur Metropolitan City, there were total 46,319 houses, which were equiped with piped tap water resources while 830 houses were reported of having tubewell water facilities. Same as, 6,727 houses had covered well while 1,159 houses didn't have any cover on their tubewell. Other resources of water facilities were spout water (3669) and river stream (155), which were reported of the household's source of water. 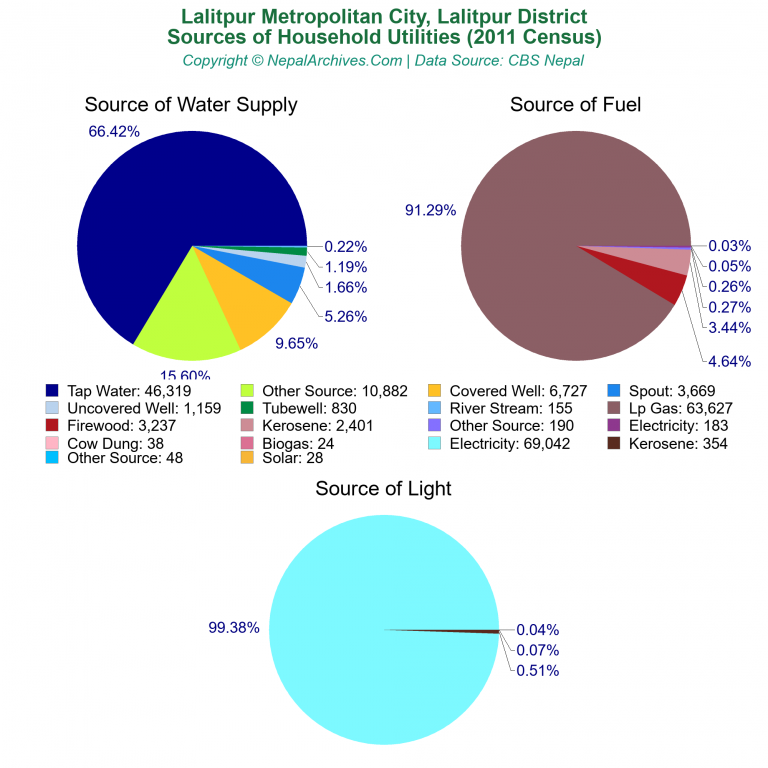 With reference to source of fuel, 3,237 households reported their source of fuel as firewood while 2,401 households had kerosene as their fuel source. The LP gas was used by 63,627 households as a source of fuel. Moreover, other sources of fuel were cow dung (38), bio-gas (24), fuel electricity (183), etc.

out of 70,256 households in Lalitpur Metropolitan City, 898 houses reported of having no any facility in their household while 68,710 households reported of using at least one facility. Households using at least one facility, such as radio, television, internet, etc. have been illustrated in the table below.MobilePhone was used by the maximum households with total users of 63,717, while Television was the next mostly used facilities with total household users of 46,906. 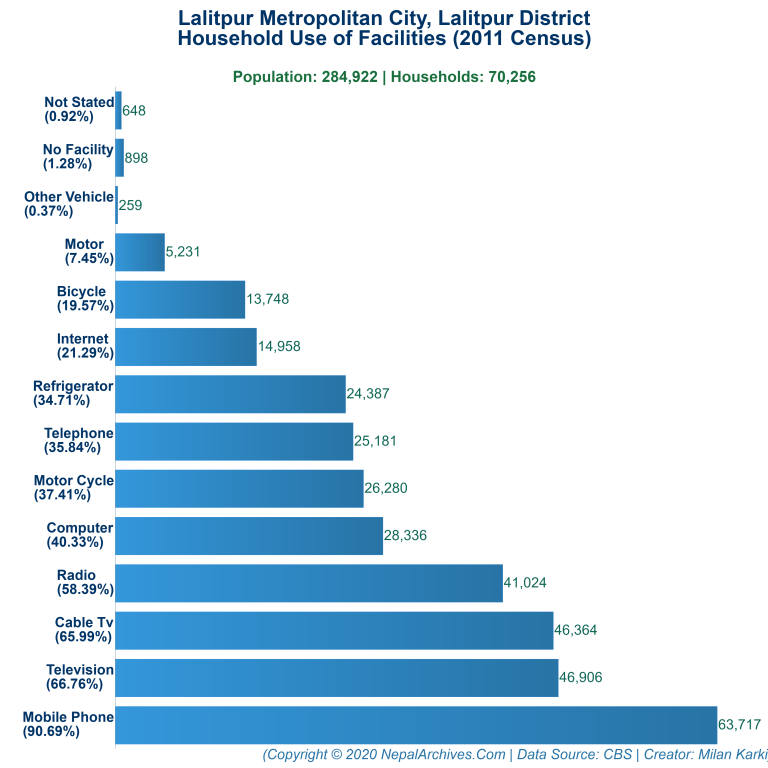 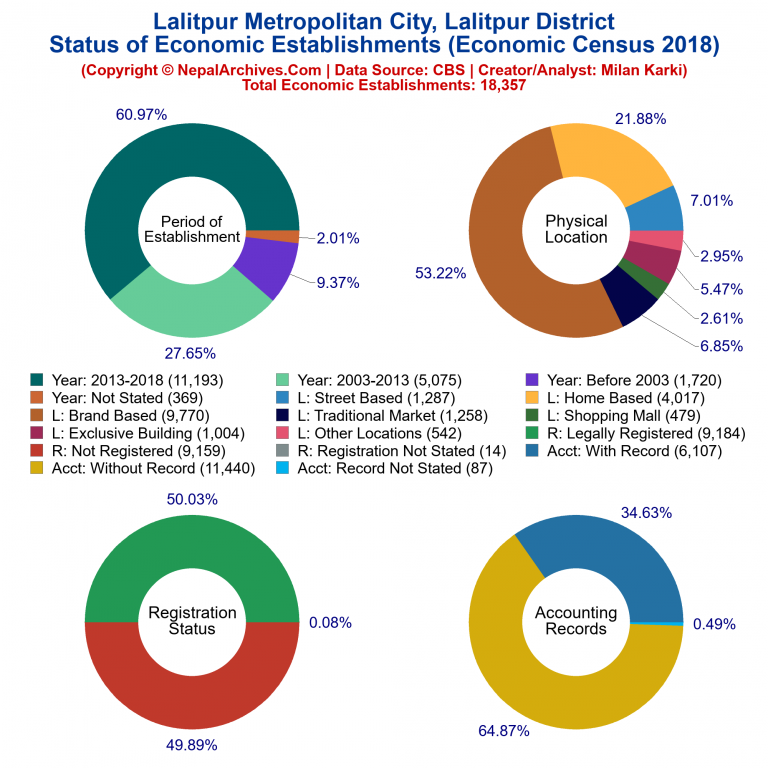 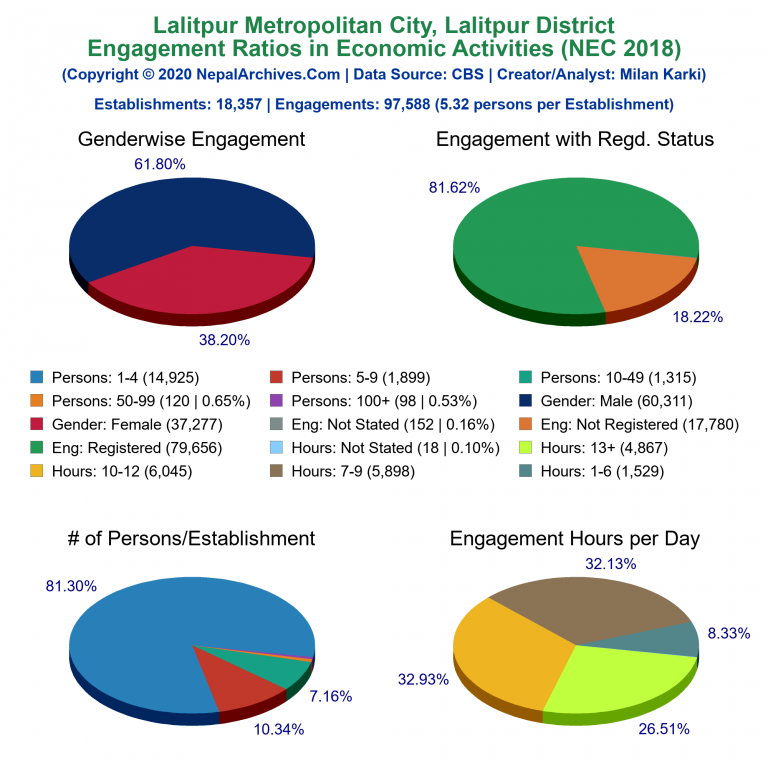 Similarly, the engagement of males were 61.80 percent while the females are 38.20 percent. 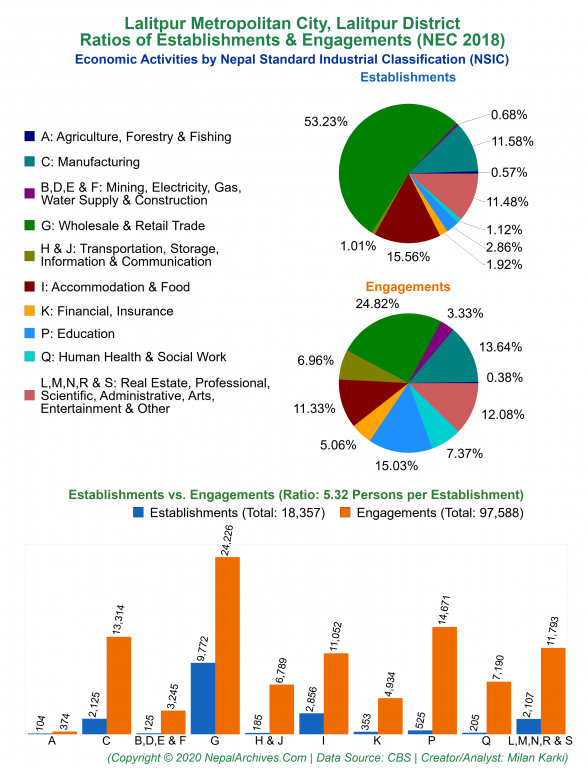 (Desclaimer: The statistical data published about Lalitpur Metropolitan City profile in this page are exclusively obtained from Nepal Government's Central Bureau of Statistics (CBS) as well as other verifiable Nepal Government sources. The profile of Lalitpur Metropolitan City has been published for information and research only, which can be relied based on its primary source. Nevertheless, NepalArchives.Com does not provide any guaranty of the validity of the stastical information in this page. Any question about the statistical validity of information should be directed to Nepal Government Agency. However, if you found any error or inconsistency of information in this page, please kindly let us know so that we will improve this page. Thank you.)